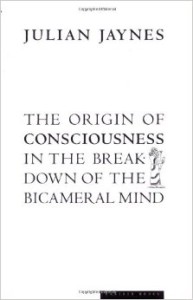 The Origin of Consciousness in the Breakdown of the Bicameral Mind - Summary at Blas.com

Jaynes argues that up until 2-4,000 years ago, men were not conscious but followed the voices of gods. As language and writing developed, consciousness began to emerge which then displaced these voices. On the surface it seems crazy but Jaynes does an incredible job of making it seem plausible