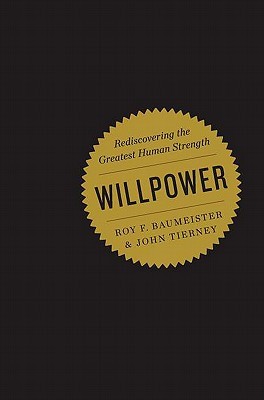 One of the world's most esteemed and influential psychologists, Roy F. Baumeister, teams with New York Times science writer John Tierney to reveal the secrets of self-control and how to master it. In Willpower, the pioneering researcher Roy F. Baumeister collaborates with renowned New York Times science writer John Tierney to revolutionize our understanding of the most coveted human virtue: self-control.In what became one of the most cited papers in social science literature, Baumeister discovered that willpower actually operates like a muscle: it can be strengthened with practice and fatigued by overuse. Willpower is fueled by glucose, and it can be bolstered simply by replenishing the brain's store of fuel. That's why eating and sleeping- and especially failing to do either of those-have such dramatic effects on self-control (and why dieters have such a hard time resisting temptation).Baumeister's latest research shows that we typically spend four hours every day resisting temptation. No wonder people around the world rank a lack of self-control as their biggest weakness. Willpower looks to the lives of entrepreneurs, parents, entertainers, and artists-including David Blaine, Eric Clapton, and others-who have flourished by improving their self-control.The lessons from their stories and psychologists' experiments can help anyone. You learn not only how to build willpower but also how to conserve it for crucial moments by setting the right goals and using the best new techniques for monitoring your progress. Once you master these techniques and establish the right habits, willpower gets easier: you'll need less conscious mental energy to avoid temptation. That's neither magic nor empty self-help sloganeering, but rather a solid path to a better life.Combining the best of modern social science with practical wisdom, Baumeister and Tierney here share the definitive compendium of modern lessons in willpower. As our society has moved away from the virtues of thrift and self-denial, it often feels helpless because we face more temptations than ever. But we also have more knowledge and better tools for taking control of our lives. However we define happiness-a close- knit family, a satisfying career, financial security-we won't reach it without mastering self-control.